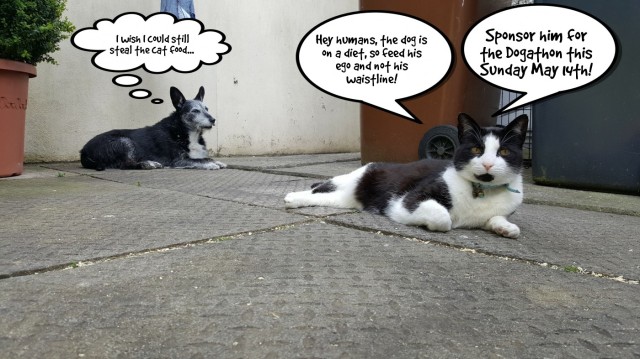 Hello humans,
Oskar here. I’m lowering my dignity and appealing to you today in aid of my best pal Jasper, who I’ve known all my ten years of life.
He’s feeling a little bit depressed at the moment, because all his legs hurt and, to add insult to injury, the human servants have put him on a diet as he was turning into a little tub of lard on legs. He’s always been a greedy pig with no sense about when he’s full, but I digress…

He’s been asked to help with the Dogathon again this year and it’s really cheered him up, as he likes to feel useful and important. (I don’t understand it myself, as it’s a dog thing. Us cats know we are important and don’t need a job to make us feel that way!)

I don’t care so much for other dogs myself, but since Jasper and I are good pals, I am asking you kind people to help cheer him up and make his day by donating to his fundraiser.

Maybe then he’ll stop whinging about his lack of food and asking me to distract the human so he can steal my leftovers.

Feed his ego and not his waistline by donating here: https://www.idonate.ie/fundraiser/11364586_sponsor-jasper-for-the-dogathon-2017.html

I am a rescue doggie who was saved by MADRA, a dog rescue based in Co Galway, Ireland. I was adopteds a long time ago and have a great life with my humans, so I does whatever I can to help the other doggies who aren't as lucky as me. You can find MADRA's website here: www.madra.ie
View all posts by jaspermadra →
This entry was posted in cat, cats, Dog rescue, dog weight loss, Dogs, older dogs, shelter, Uncategorized and tagged dog, Dogathon, dogs, Galway Ireland, MADRA. Bookmark the permalink.