We already got some stupid laws, but they wants to make it for all spaces all the time now!

Humans, I need your help!

What do you mean I might never get to mooch off lead again?! We’ll kill each others!

Last week, I heard the most terrible news evers! The humans in charge of all the lovely places we likes to go to on our walks are planning a really stupid new law! You’re not going to believes this, but they wants to stop all doggies in Galway City from EVER being alloweds off the lead in publics!!! I mean reallies, can you think of a worse thing to come up withs?!

Even us old doggies likes a bit of freedom!

You might say that I’m an old doggie and I don’t really needs to run and play anymores, so it doesn’t affects me as much as the young doggies. This may be a little bittie true, but I still likes to mooch without being tied to the human.

Swimmings is definitely better off lead.

And I likes to go swimmings, which doesn’t work very well on a lead you know humans! It was tangly enough when we trieds putting a rope on the toy so I didn’t keep losing them! And how is a doggie meant to chase bubbles on a lead?! Getting over exciteds and leads do not go together very well, thank you all the same!

When I was still young and crazies, I know I would have gone insanes if I never got to play properlies – you humans are too slow to be tieds to all of the time!

I asked the human why on earth would anyone want to come up with a stupid law likes that?! And she said she didn’t know, but that some peoples don’t like us doggies and think we shouldn’t be alloweds anywheres. And some people are afraid of us and think that we should stay at home in case they someday wants to walk along that little doggie walking place where you never meets anyone except people with doggies and gets scareds. I think that’s a selfish attitudes if you ask me! I mean, I’m scareds of horses, but I still admits that they should be alloweds to be outside and not lockeds away all day. I’ll just stay away from where they goes and that way everyone is happies.

I don’t know why peoples think that we need any more laws than those we got alreadies? 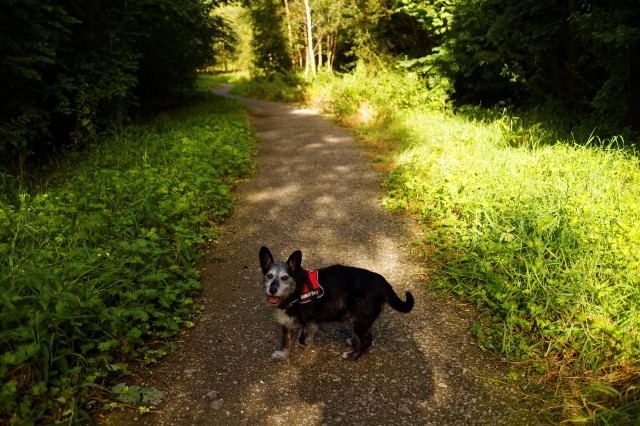 One doggie, walkings happily and listening to the human when she says “wait”.

There’s already a law that says that doggies have to be under the effective control of our humans when outside. That doesn’t mean on a lead, that just means that us doggies got to not bothers other peoples and doggies and come back to our humans and not run in front of cars and stuff. Sensible stuff like that, not: “Doggies got to be led along on a rope and never gets to play properlies unless their human owns a field.”.

Moochings happily. Bothering no ones.

I never bothers anyone when I’m out mooching off leads. I know we sometimes pass peoples who don’t like doggies, but guess what – I got no time for people who don’t likes me, so I just ignores them. I only say hello to nice people with other doggies.

Happy to be on lead when there’s lots of peoples.

So why do we needs more laws?!

And I haven’t even mentioneds the worst bit yet.
They say all what they calls dangerous breeds should never go anywheres at all, even on lead, except the pavement! There’s no such thing as dangerous breeds humans! All doggies is different!

It’s not even likes they enforces the laws they made alreadies. I know for a fact it’s illegals for a doggie to roam by himself, but we sees doggies doing it all of the time!

Please fight for my right to mooch!

So please lovely humans, tell the humans in charge that us doggies should get the chance to play and mooch and sniff and play ball off lead! Think of the youngsters coming up behind me if you don’t think of me…

PS: I know it’s been ages since I posted anythings, but that was the human’s fault, not mine. You see, when she’s finished with workings, she says she doesn’t feel like writings my stories for me, ’cause she’s been sitting in front of a computer all day alreadies. So I got no one to dictates to!

I am a rescue doggie who was saved by MADRA, a dog rescue based in Co Galway, Ireland. I was adopteds a long time ago and have a great life with my humans, so I does whatever I can to help the other doggies who aren't as lucky as me. You can find MADRA's website here: www.madra.ie
View all posts by jaspermadra →
This entry was posted in Dog rescue, dog training, Dogs, older dogs, photography, Uncategorized and tagged dog, dog photography, dog rescue, dog training, dogs, Galway, Ireland, Jasper's Training Tips, leash laws. Bookmark the permalink.