I swear, sometimes I despairs of humans…

#2 Dogs need a big garden to be happies

Would you believes, that people often use this as an excuse to get rid of their doggies?! It’s the myth that us doggies needs a big garden to play in and needs to be rehomed if they gets too big for it?! I swear, I’m not making this stuff up, some peoples really and truly wants to rehome their doggie because it got “too big for the garden?!” Maybe they adopteds an elephant instead of a puppy by mistakes?!

I think I’ll wait til later to pee…

I must admits a garden is handies, ‘caue otherwise you has to bring the humans out on a lead everytimes you need to pee and that can get annoyings. Especiallies if you got an upset stomach at 3am and you really has to go this minute! The humans don’t likes going outside in their pyjamas…

And it’s really nice to be able to sit in the sun on a nice day, I likes having a garden when it’s sunny. And I loves helping the humans in the garden when they’re doing stuff, so I got a lot of garden balls out there to help with workings in the garden.

What, go outside by myself, are you kiddings?!

But, just between you and me, I have no interest whatsoevers in being outside on my own. Nope, I did enough of that when I was lost and starvings and freezing before I got rescued. Never again I says!

So, unless the humans comes out with me, I never spend more than 5 minutes in the garden to do my business and then have a quick sniff at the gate and then I asks to be let back in again.

You see, us doggies don’t exercises ourselves when we’re left outside, we mostly sit around waiting for the humans to come back again. The garden is kind of borings too, ’cause there are no new smellies.

Some doggies gets so bored outside they barks and barks all day just to give themselves something to do. There’s some doggies like that behind me and boy do I feel sorries for them! (And the humans who lives close to them… )

Walkings is much more interestings than being stuck in the garden.

My garden is pretty tinies (and muddies after this winter), but I can manages just fine, ’cause the humans takes me on a nice walk EVERY day like they’re supposed to. That’s where I gets my exercises and my brain gets to be busy and enjoy new smellies and sights and stuff AND I gets to meet other dogs and peoples.

I’m very luckies, because apart from having good humans, I also lives near a nice big green field for playing fetch in, which is much more fun than playing it in my tiny garden, ’cause you can run and roll and stuff. That’s not so important nowadays, but when I was a youngster, I used to spend half an hour playing non stop fetch before I even started my proper walk, ’cause I had lots and lots of energies. And of course we always did trainings as well, ’cause I needed lots of mental exercises too. So I was a traineds and tireds doggie and that means a good doggie who doesn’t wreck your house.

One of my friends I used to meet didn’t have a garden at all and he was a huge doggie – I think he was a Labrador mixed with a horse. His human walkeds him a couple of times a day and he was perfectly happies and well behaveds. Much, much happier than if he’d been left outside all day on his own boreds stupid anyhow! 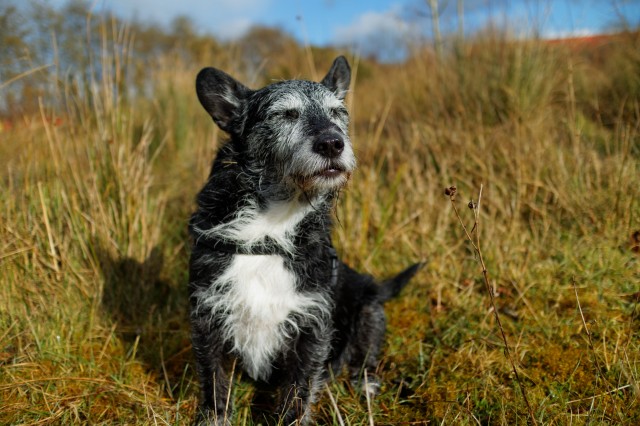 So, gardens don’t matters at all, it’s having humans that cares enough about you to make sure you’re happies that’s the important bit. Sadly lots of doggies still haven’t got that, so if you’re a doggie who does, don’t forgets to appreciate how lucky you are and give the humans a big lick.

I am a rescue doggie who was saved by MADRA, a dog rescue based in Co Galway, Ireland. I was adopteds a long time ago and have a great life with my humans, so I does whatever I can to help the other doggies who aren't as lucky as me. You can find MADRA's website here: www.madra.ie
View all posts by jaspermadra →
This entry was posted in Dog rescue, dog training, Dogs, older dogs, photography, positive training, Uncategorized and tagged dog, dog rescue, dog training, Jasper's Training Tips, MADRA. Bookmark the permalink.