#80 – Walkings with the boring human. 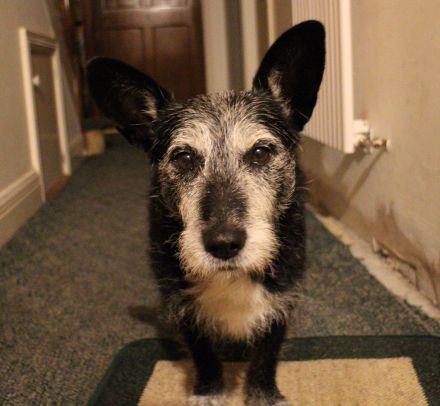 Go out with you? No thanks!

I am never ever, going out with the boring human ever again!
I don’t know if I’ve ever mentioneds the boring human before? You see, my human has a brother who hardly ever does anything interestings with me at all. He seems to spend most of his life starings at that boring computer thingie and he can be really grumpies if you interrupts him in the middle of whatever he is doing. And worst of all, the big meanie never, ever, EVERS gives me anything when he’s eatings. Not even when I try my biggest, saddest eyes on him. Sheer meanness I calls it! 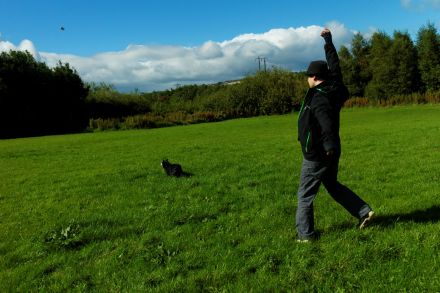 The boring human could be a super fun human if he trieds!

It’s a pity, ’cause he could be really, really fun if he trieds just a little bit. ‘Cause he plays the best tuggies evers and can be really fun when he wants to, but he hardly ever does.

But anyhows, my own human was sick last week and had to stay in bed, so the boring human said he’d take me for a walk for a change. I thought it was quite an exciting idea, ’cause we hadn’t been out together in years and years. So I thought walkings with the boring human might actually be fun and interestings and I was happies to go.
How wrong I was!

It was fun at first!

OK, it started out just fine, with the boring human bringing my toy and playing with me. But he’d not gone out with me in so long, that he hadn’t realised that I’m an older doggie now and can’t chase around like crazies after a toy all day anymore. So I got it five times, but then I needed to stop and have a rest. 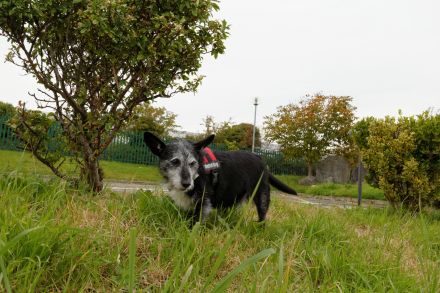 Time for a mooch!

So I decideds to have a nice mooch instead. My human and even the grand human appreciates that I’m old and lets me mooch. But not the boring human – would you believe, he had this idea that I should walks fast and not mooch.

And he didn’t just stand there and calls me or anything. The big meanie decideds to crowd me every time I stopped by walking really close behind me and loomings over me so I had to keep walkings. I mean the indignity, herded along like a sheep! The nerve of that human. 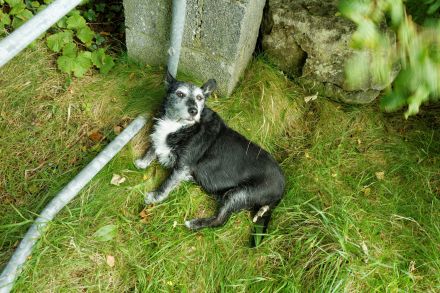 So I had to hurries along with a human crowding me all the way and me not getting to sniff anyone properlies. It was more like torture than a fun walkie if you asks me.
We went for ages too, so by the time we got home again I was exhausteds. And by that evening, I was so stiff from all that hurrying that I could hardly walk. 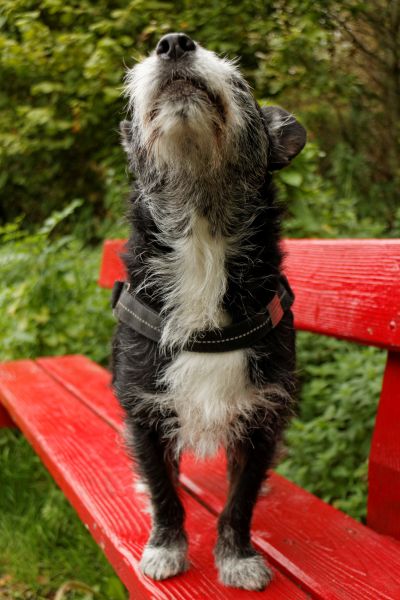 That’s the last time I ever lets you take me out on a walk!

That’s the last time I ever goes out with that boring human. Next time my human is sick, I’ll just stay at home and look after her instead.

I am a rescue doggie who was saved by MADRA, a dog rescue based in Co Galway, Ireland. I was adopteds a long time ago and have a great life with my humans, so I does whatever I can to help the other doggies who aren't as lucky as me. You can find MADRA's website here: www.madra.ie
View all posts by jaspermadra →
This entry was posted in Dog rescue, dog training, Dogs, older dogs, photography, positive training and tagged dog trainging. Bookmark the permalink.