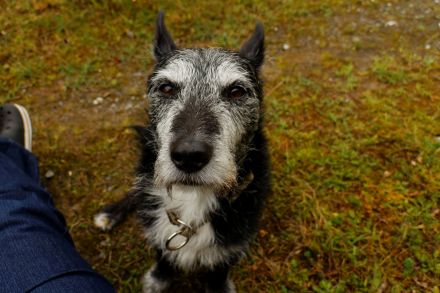 I am very displeased with you human!

OK, now I am really, really annoyeds with the human!

See, today was a lovely day and we were having a really, really nice happy moochings walk and I was feeling all happy and relaxeds.

We went someplace new and it was really interestings and there were lots of new smellies. All that was lovelies,  we were coming back home again, and we were walking the old way and everything was fine.

Then suddenly, there was this really funny noise and this monster comes running out of the bushes and starts chasing me! So, of course, I starteds running for my life ’cause I thought it wanteds to eat me. The human said they haven’t seen me running that fast for years!

Run faster human, it’s going to get us!

The human had to hurry after me to make sure I didn’t run into the road when we got to the end of the safe bit. I was so frighteneds that I wouldn’t even stop when she told me STAY – I just started walking slowers so the human could catch up.

I was nearly eaten by a monster, why are you laughings?!

Would you believe that, once the human put me back on the lead, instead of asking me if I was OK and feeling sorry for me for getting such a shock, she laugheds at me! I mean the nerve!!! 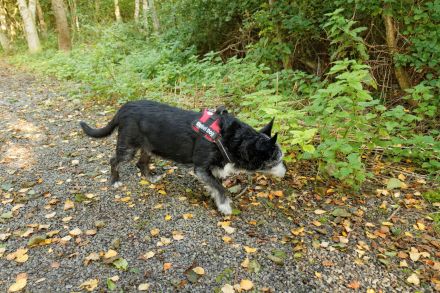 Is the monster gone?!

She said there was no monster at all, it was just a little, bitty baby horse and called me a big wuzzy! She said the horse was more scared of me than I was of it – or at least it would be if I wasn’t such a scaredy cat. The nerve, I bet if something ten times as big as her came out of nowheres and starteds chasing her, she’d be runnings too!

What’s this talk of scaredy cats?!

I told Jade about the scaredy cat comment and she’s annoyeds with the human too, ’cause she says she’s not scared of anything! If Jade decides to scratch the human for being cheekies, it’ll serve her right.

Keeping a nose out for monsters.

Anyhows, there was someone there catching the baby horse, so I hopes it’s safe to go walkings there again soon. But I’m going to keep a careful look out, just in case.

I am a rescue doggie who was saved by MADRA, a dog rescue based in Co Galway, Ireland. I was adopteds a long time ago and have a great life with my humans, so I does whatever I can to help the other doggies who aren't as lucky as me. You can find MADRA's website here: www.madra.ie
View all posts by jaspermadra →
This entry was posted in Dog rescue, dog training, Dogs, photography and tagged animal, cat, cats, dog, dog photography, dog rescue, dogs. Bookmark the permalink.