I know I promised to be a bit less grumpies, but I tells you sometimes it’s hard.
Wouldst you believes the humans drove me ages in a car – even though they knows I don’t likes it at all, then made me stand under a dripping tree in the rain for ages and ages. And then to add insult to injuries, they locked me into the front of the MADRA van with Stella ’cause they said I was getting too wet and cold and they thought I would be more comfortables in there. How am I meant to beg treats off of people when locked into the MADRA van humans?!

The Canine Carnival was in a lovely spot, but I didn’t get time to sniff it much.

It was all part of my helping with the Canine Carnival. This was the first time the human brought me along, ’cause last time the Carnival was on years ago I wasn’t famous yet and they didn’t think I’d likes it. But this time I had to come along and say hello to everyone. I owes a duty to my fans you see and don’t want them to be unhappies ’cause they missed me. (OK, I admits it, I was thinking of all them lovely treats that neededs eating too.) 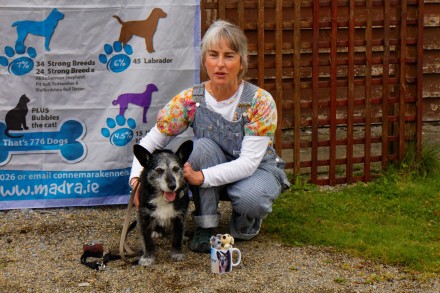 There was also the important job of launching my lovelies new MADRA Jasper mugs. They’re made speciallies for all the peoples who thinks I’m lovelies, but aren’t luckies enough to have me as their own doggie. So they can buy my mug and see me every single day and help raise monies for rescue doggies at the same time. It’s a real win win situation all round! (I wonder do I gets commission in treats too?!)

I hears I might have another guest spot in the new MADRA calendar too, so watch this space! 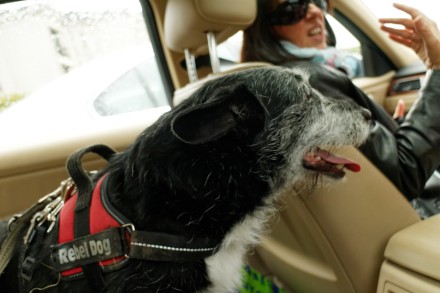 I don’t mind cars as much as I used to. I got my seat belt on too!

It meant drivings in a car for ages and I might have mentioneds that I don’t likes driving in cars at all. I used to really hates it, but I got used to it a bit more, so now I just don’t likes it much.

It’s importants to let your fans say hello (and let them give you treats!).

But it was a good day too, I got to meet lots and lots of people and dogs and most of the dogs weren’t even annoyings, so I didn’t have to tell them off. And while I was sitting under the trees, everyone came up to say hello to me and slip me treats while the human wasn’t lookings. So I quite enjoyeds myself.

This Llama came to visit, he was OK.

We also had another visitor before that, they said he was a dog, but I thinks he was a Llama. Anyhows, he was only meant to stay for a few hours, but ended up staying a whole day and night! He wasn’t too annoyings, so I just ignoreds him until he went away again. I even let him play with my toys and the humans said they were mega proud of me for being such a good doggie and host.

The humans say they’re proud to be my humans.

They even bought me a new ball to rewards me, so I may let them bring another doggie around sometime in the future when I need new fun stuff!

I am a rescue doggie who was saved by MADRA, a dog rescue based in Co Galway, Ireland. I was adopteds a long time ago and have a great life with my humans, so I does whatever I can to help the other doggies who aren't as lucky as me. You can find MADRA's website here: www.madra.ie
View all posts by jaspermadra →
This entry was posted in Dog rescue, dog training, Dogs, photography, positive training and tagged Canine Carnival, dog, dog photography, dog rescue, dogs, MADRA. Bookmark the permalink.