What am I meant to do with this baby dog?!

I thought having Violet visiting was bad enough, but then the humans went altogether crazies and decided to foster a pupster! I mean, they knows I likes to keep my distance from pupsters, ’cause, just between me and you, I think they’re slightly scaries. 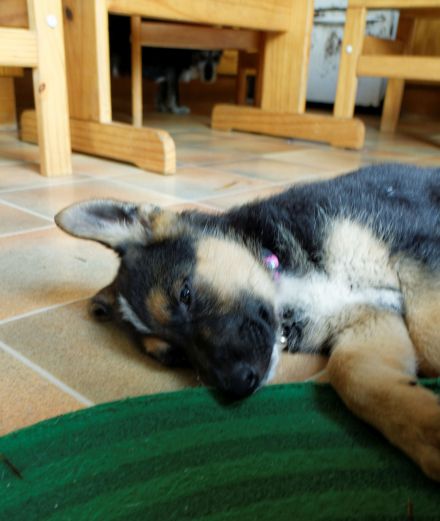 See, I met kittens before when I was young and their mothers are scaries, so I’m sure that pupsters all have scary mothers hiding in the background too, ready to come out and bites you if you looks at their baby the wrong way. So I’d rather not go near pupsters at all,  just in case. Annoyed mamas are the scariest thing evers!

5 minutes in the house and she stole my chewie. (I admits it was a boring old one, but it was still mine!)

The humans was completely meanies and didn’t care. They said: “Tough Jasper, she’s only a baby and you got to be nice to her.” And then they wouldn’t even hide my toys like the last time, ’cause they said that babies need to play and they knew I wouldn’t bites a baby for taking my toys. Takings advantage of my good nature I calls it!

So, I had to put up with annoying baby dog all week! She was annoying too, you wouldn’t believe how she screameds if the humans left her alone for two minutes. I never screameds like that in my life.

Let me explain again how to behaves, little pupster.

Spoilt I calls it, when I was a pupster I was gratefuls for any attention I got and didn’t expect to get it all day long. And I couldn’t imagine ever being that clingies, I mean I loves my humans lots, but I’m not going to follow them around all day and night. We both needs our own space.

Watch me carefullies and you’ll soon have the hang of this toilet training business.

And she needed so much watchings! We had to get up in the middle of the night to bring her out ’cause she couldn’t manage all night without going to the toilet. And she tried to chewies on everything! And the humans kept tripping over her all the time, ’cause she followed them around so much, so they had to put a cat bell on her so they could hear her. 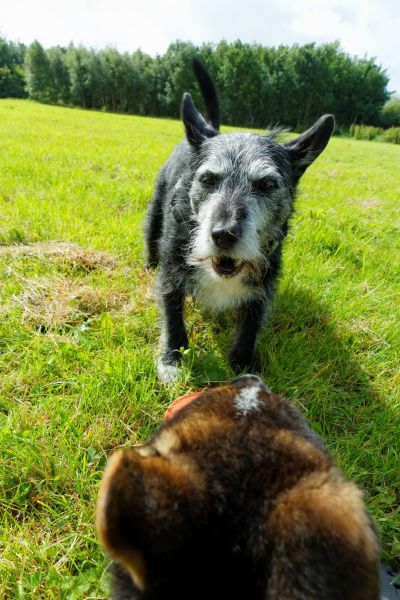 Don’t even think about it!

The worst thing was, she kepyt trying to bite my ears and my tail and stuff and steal the chewies from right under my nose. So I had to tell her off all day long and, would you believe the nerve, she called me her grumpy uncle Jasper!

How could you do this to me humans?!

I’m not grumpy, I just expect some basic manners when you visit me pupsters! The cats agrees with me, they spent all day outside while she was here. Or hiding upstairs on the tall bed. 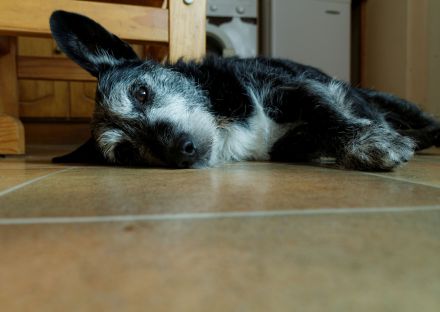 Exhausted after taking care of pupsters.

Anyhows, I was feeling a bit upset with the humans, but I forgives them, ’cause they realised they owed me big time. 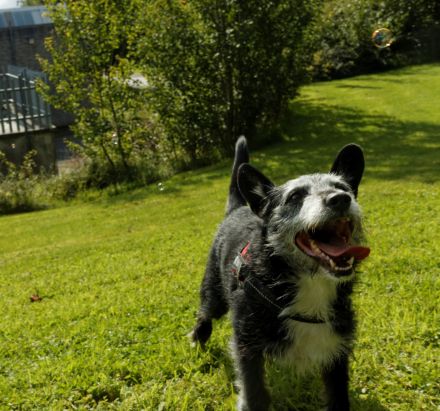 Bubbles make up for anything!

So today they took me on a lovely walk and we found a lovely grassy bit and they blew bubbles for me until the packet was empties. It was really, really, REALLY lovelies and I forgives them anything after that.

I could even put up with another baby if it meant this much fun!

It nearly made me want to get another pupster, so I can have so many bubbles after, but maybe not this year…

I am a rescue doggie who was saved by MADRA, a dog rescue based in Co Galway, Ireland. I was adopteds a long time ago and have a great life with my humans, so I does whatever I can to help the other doggies who aren't as lucky as me. You can find MADRA's website here: www.madra.ie
View all posts by jaspermadra →
This entry was posted in Dog rescue, dog training, Dogs, photography, positive training, shelter and tagged animal, cat, cats, dog, dog photography, dog rescue. Bookmark the permalink.