Sick of having to sleep on the floor!

OK now, I’ve had enough of them stupid cats. I don’t know why the humans puts up with them, ’cause they’re just annoyings! 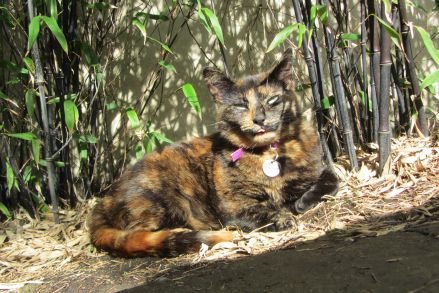 You might have seen that Blossom went missing for over two weeks latelies. I mean really, how unreliabes can you get cats? You knows that the humans get upsets if they don’t know where we are all the time and you still goes missing! That kind of behavious is just not acceptables stupid cats! Of course, Blossom says she got lost and it wasn’t really her fault, but if she was carefuls she wouldn’t get lost in the first place. I never gets lost ’cause I’m smart and I knows the humans can’t manage without me. 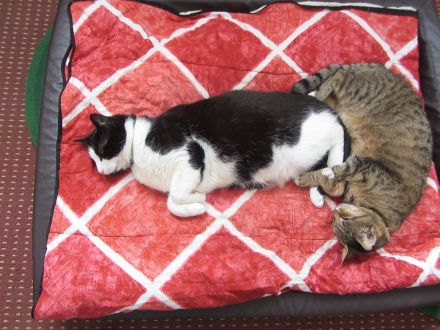 Excuse me, that’s MY bed!

All of that wouldn’t be too bad, ’cause it only upsets the humans. But the worst thing about cats is that they are the biggest bed thieves evers! Every time I turn around, there’s a cat in my bed and I has to sleep on the floor (or the less comfortable bed… ).

Jade even tries to climb into bed with me when I’m already sleepings in it and when I growl at her she just ignores me and climbs in anyhows. She says she doesn’t mind sharing the bed with me, but I likes to sleep alone. So I has to leave and go and sleep someplace else…

But I wanteds to go for a ride…

And she’s even stolen my new Jasper trailer, she just sleeps in it all day and when we wants to use it we haves to ask her if she minds movings. And then she gives me dirty looks – Jade dirty looks are scaries! 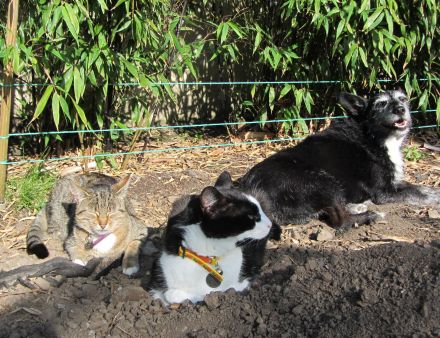 I don’t minds spending time with the cats if they stay away from that soppy stuff!

And another thing them annoying cats do, every single one of them, is to pretends that they really, really likes me and comes in and rubs themselves against me when they sees me. Especially big Oskar when he comes in from outside and he’s really, really wet! I know they knows that I don’t go into for all that yeuchy cuddlings stuff and they’re just doing it to annoy me!

What on earth was that?!

My own cats are bad enough, but to add insult to injuries, them stupid wild cats have starteds hanging around the place, ’cause the humans told me it was mean to chase them and them cats realised I’m not scaries after all! And now they’re getting really cheekies. They’ve come up and annoyeds me while I was sleeping outside and the other day I was coming back from going to the toilet and one was standing in my way and bonkeds me on the nose when I tried to walk past him! I mean, the nerve!

Something has to change!

So, I reckons they all haves to go before the wild cats all moves in too and the doggie AND the humans all ends up sleepings on the floor. One doggie should be enough for the humans, they don’t need cats as well.

Save a poor doggie from having to sleep in a carboard box!

So, if anyone wants any annoying cats, just calls me and I’ll arrange its. We’d better not tell the humans until they’re safely gone though, ’cause the humans likes them for some reason.

Oskar is OK, at least he mostly only steals the human’s beds!

I guess we could maybe keep Oskar though, ’cause Oskar does really loves me and I quite likes him… 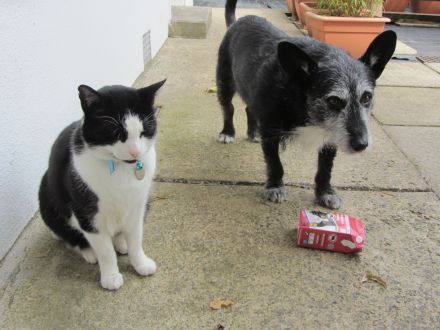 And I just remembereds that I can’t steal the cat food if there’s no cats! I guess we’d better keep them after all. They’re not that bad now I comes to thinks about it… If I asks them nicely, maybe they will stick to stealing the human’s beds instead of mine.

I am a rescue doggie who was saved by MADRA, a dog rescue based in Co Galway, Ireland. I was adopteds a long time ago and have a great life with my humans, so I does whatever I can to help the other doggies who aren't as lucky as me. You can find MADRA's website here: www.madra.ie
View all posts by jaspermadra →
This entry was posted in cat, cats, Dog rescue, dog training, Dogs, photography and tagged cat, dog, dog photography, dog rescue, dogs. Bookmark the permalink.