You can’t just walk in front of them cars!

The humans have remindeds me that I started out giving training advice to help people and doggies get along betters and I seem to have got a bit distracteds with talking about myself latelies. I reckons if you followeds all my advice from the beginnings, you should all be super well behaveds and happy doggies and humans by now! But I guess you might still have a few issues I should addresses.

You gotta wait for bicycles too!

One thing that the humans say I could do with learning better myself is road sense. They reckon if I ever got out by myself I’d ended up flat like a pancake on the road, ’cause I got none! They have to keep an extra tight hold on my lead just to make sure I don’t decides to walk into the road when the fancy takes me. See, if I decides I want to go a certain way, I’m just going to try it, no matter what!

It’s all about the Jasper dog you know!

I blames the humans really, when I  first came here, I didn’t think I was importants at all, ’cause someone dumpeds me after all and you don’t dumps important stuff. But the humans made me realise I am importants too. So now I think I’m so importants that, if I wants to cross the road, all the cars should stop for me!

I think everyone has to look out for me!

Just between you and me, I do know in my head that cars are scary and dangerous and one driving into a little doggie like me is not going to end very happilies. But there’s so much lovelies, interesting stuff out there, that I kind of forgets to look out for them. So I relies on the humans do it for me, ’cause I’m always on the lead around cars anyhow.

That’s why I always stops and waits when I’m off lead and the humans tell me to when they need to put the lead back on, ’cause I prefers them to do all of the hard works of looking out for traffic instead of me!

It’s easy to get distracted while smellings!

The humans say some doggies are smarter than me and do keep an eye on traffic, but I think they must still get distracteds, so I don’t think the humans should trust them to be smart all the time either. It only takes one really good smellie or a nice doggie on the other side of the road or stuff like that and the doggie might forget all about cars. Then it’s mega OUCH! at best and bye bye doggie at worst. Plus the humans say it’s always the doggie’s human’s fault if a car hits them, no matter what, and their humans have to pay for all the damage to the car. Not that us doggies would cares about that, but I believes the humans do!

Worrying about cars is borings, so I’m happies to let the humans do it!

Anyhow, I thought about it and I don’t think the humans could train me to look out for cars better, unless one hit me to reminds me how dangerous and OUCH! they can be, and that isn’t a good idea at all. ‘Cause I could get really, really badly hurt or dies and we couldn’t risk that! So I reckon I’ll keep on relyings on the humans to keep me safe – they’ve done a pretty good job at it so far! So humans, you got to manage us doggies near cars instead. 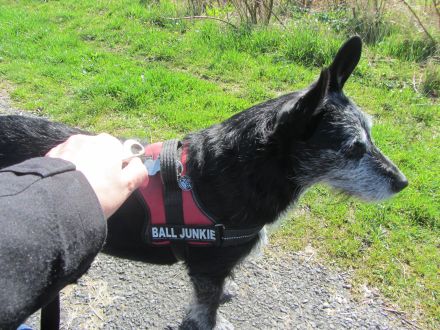 Happy to go back on lead and let the humans worries about cars!

Of course, it can’t hurt at all to make sure your doggie has a really, really good STAY and WAIT so they knows when to stop right away when getting too near the road. STAY is better than COME near traffic, especially if the doggie has already run across the road before you could stop them and you has to go over and get them back! (I admits, I did this once a long, long time ago and the humans was not very happies with me at all…) 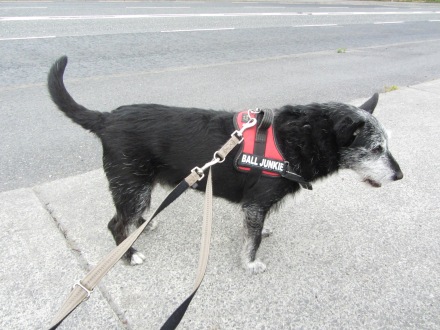 A nice training lead that you can make shorter is safest when walkings near the road.

Oh and humans, if you have a doggie like me, who is a bit distracteds around traffic (the humans told me the right word is stupids, but I prefer distracteds!), don’t use one of those flexi leads and forgets to tighten it! Flexi leads should only be for doggies who can’t go off lead and are walking someplace safe where there are no cars. Use a training lead like mine or a short lead near traffic instead. Imagine how bad you would feel if your dog got OUCH! right in front of you. (And the doggie would feel worse!).

I am a rescue doggie who was saved by MADRA, a dog rescue based in Co Galway, Ireland. I was adopteds a long time ago and have a great life with my humans, so I does whatever I can to help the other doggies who aren't as lucky as me. You can find MADRA's website here: www.madra.ie
View all posts by jaspermadra →
This entry was posted in Dog rescue, dog training, Dogs, photography, positive training, shelter and tagged dog, dog photography, dog rescue, dog training, dogs, Galway, Jasper's Training Tips, MADRA, Mutts Anonymous Dog Rescue And Adoption, og training, positive training, shelter. Bookmark the permalink.