I trieds the look, but the humans used THE VOICE

You might have noticed that my humans are pretty easy goings about most things.
Sure, they starteds out with this crazy idea that they were going to have the best traineds dog ever and I was going to listen to everything they told me like a robot. But they soon learned betters. They realised that if they wanted a really, really obedient doggie, they shouldn’t have got a Terrier, ’cause us Terriers are stubborn and smart and we thinks for ourselves. And then they realised that they didn’t really cares, because they wanted a doggie, not a machine!

So we workeds hard at learning the really importants stuff, like not runnings away and coming back and stayings and leave its. But they don’t much cares about the other stuffs, like sittings forever or not barkings at all and stuff like that. 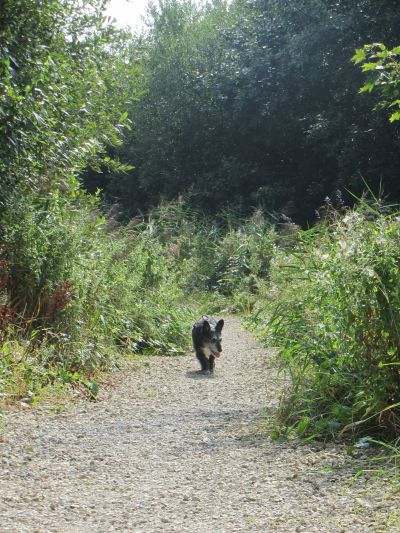 Older doggies like me needs to be alloweds to do our own thing.

Now I’m olders, I admits I’m even more stubborns than I used to be and I likes to sniff even more, because I don’t feel like playings that much. So, just between you and me, I does sometimes ignores the humans on purpose by pretendings I can’t hear them. The humans just tries to spoil your fun sometimes and I just get fed up with it and ignores them. Since the humans are easy goings, they sometimes let me ignores them.

When the human gets annoyeds, I have to hides, so I prefer to listens before that happens!

The humans tell me to go to bed when I have been bad, I don’t likes that!

The voice often comes out when we’re at adoption days and stuff and I decides I don’t likes a dog I meet and wants to tell him off (it’s nearly always boy dogs I don’t likes!). The human is a meanie and will never let me teach other doggies manners, it’s not fair! She says it’s not nice and I could gets hurt if the other doggie decides to teach me manners back!  (She knows when I’m teaching manners, I only makes a lot of noise, but she says some people and doggies don’t realises that.) So she always uses that voice and makes me go sit in my tent to get me away from the other doggie. The big meanie, but I got to listen ’cause that voice means business. 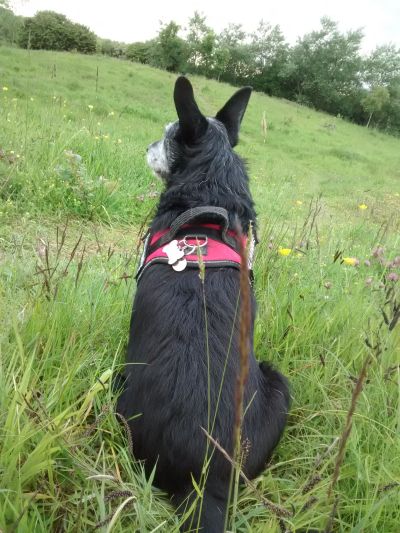 You got to know when it’s safe to do your own thing and when you got to listen.

She also uses it when I get too far ahead of her and has to stop to wait ’cause we’re coming near places where there might be cars and to stop me rollings or eating stuff. I hates that voice ’cause I always have to listen… But she always tells me that I’m a good doggie afters when I do listens, so it’s not so bad I guess. And I’d rather hear that voice sometimes than never be alloweds to do anything in the first place!

I am a rescue doggie who was saved by MADRA, a dog rescue based in Co Galway, Ireland. I was adopteds a long time ago and have a great life with my humans, so I does whatever I can to help the other doggies who aren't as lucky as me. You can find MADRA's website here: www.madra.ie
View all posts by jaspermadra →
This entry was posted in Dog rescue, dog training, Dogs, positive training and tagged dog, dog rescue, dog training, dogs, Galway, Ireland, Jasper's Training Tips, MADRA, Mutts Anonymous Dog Rescue And Adoption, shelter. Bookmark the permalink.