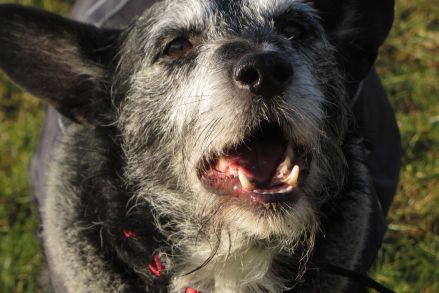 Of course I loves you humans!

The humans say tomorrow is some thingie called Valentines day. The humans gives the people they loves presents to show them how much they cares and does nice things for them. Sounds like a nice idea, but I don’t have to do something like that ’cause I shows my human how much I cares all the time. She says I make her smile every day too and that’s about as nice a thingie as you can do for a human!

Keeping the humans entertaineds is a good way of showing them how much you loves them!

I don’t go in for all of that smoochy romance stuffs ’cause I’m not a cuddle doggie – I’m an action doggie! But I sometimes lets the humans rub my head and I shows them I care by making sure they’re never lonelies and letting them help me eat my chewies. And playings ball with them every day, which is really, really importants to keep your humans happy and feeling loveds! The humans shows me they cares all year too, by taking me out for nice walkies and playings with me and buying me nice food and chewies and toys to play with.

Love is putting up with the humans even when they’re annoyings you!

So remember humans, carings about someone is not just for Valentines day, you got to makes the effort every day. (Even when the person is annoyings you by making you walk faster and not letting you sniff as much as you likes!)

I am a rescue doggie who was saved by MADRA, a dog rescue based in Co Galway, Ireland. I was adopteds a long time ago and have a great life with my humans, so I does whatever I can to help the other doggies who aren't as lucky as me. You can find MADRA's website here: www.madra.ie
View all posts by jaspermadra →
This entry was posted in Dog rescue, dog training, Dogs, shelter and tagged dog, dog rescue, dog training, dogs, Galway, Ireland, Jasper's Training Tips, Love, MADRA, Mutts Anonymous Dog Rescue And Adoption, shelter, Valentines Day. Bookmark the permalink.