Posted on January 1, 2015 by jaspermadra

You needs skill to capture just how nice I really looks!

The human says the camera loves me. Maybe that’s why she’s always followings me around with it, ’cause it would get lonelies otherwise? As you may have noticeds, the human is always taking pictures of me all day long. She says she’s just trying to capture how fabulous I am every day, but just between you and me, she’s not really, really good at it. (Don’t tell her I tolds you that though, ’cause she’s a good human and I don’t wants to hurt her feelings.)

This is not what I calls bringing my best side forward humans!

Some of the pictures works out OK and I look lovelies, but a lot of the times she makes me look all blurries. She says that taking pictures of black doggies is hard and it’s even harder when I keep on movings whenever she’s about to take a really, really good picture. But I say she’s just too slow!

I loves doing anything with lots and lots of treats involveds!

So I was realy exciteds to hear that Tracy Kirby was going to come and take my picture properlies. I never had a photo shoot before and I was little bit nervous, ’cause I wasn’t sure what it involveds. But it was all fine and not a bit scaries. Best of all, it involveds lots and lots and lots of treats and lots of attention just for me! It was doggie heavens!

This is my best smile! I was happy and comfortables getting my picture taken and you can tells!

The nice thing was that Tracy came to my house, so I didn’t have to worries about riding in cars (have I mentioneds I hates cars?!) or being in a new place. So she cames and brought lots of equipments in. I had to sniff it all, as it was all really interestings. There were big lights, so I’d you could see me properlies. And they had nice shady covers, so I wouldn’t be blinded by them. And a nice background, so you could see me instead of the kitchen cupboards, which aren’t nearly as interesting as me!

Getting your picture taken is lots of fun!

She also had that annoying flash thing on her camera, but I’m used to that ’cause my human is always poking her camera in my face, so I didn’t minds it too much. 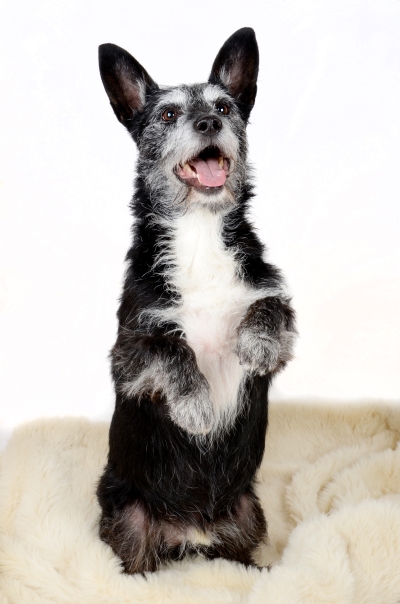 Beggings always gets lots of treats out of the humans ’cause they loves it!

And then I had to do lots of work of sittings and standing and lying down and even beggings so Tracy could get nice photos of me. It was tirings, but also FUN ’cause I got lots and lots of treats for being a good poser. The humans says that I’m the best poser evers!

I got to kill the elf hat afterwards, it was fun!

We even did some nice Christmassy photos with the elf hat, ’cause the humans thought it would look cutest. I don’t minds wearing hats just for a minute, although I admits I prefers shaking hats instead of wearing them!

The humans says they pictures are super lovelies and bring out all my nicest bitties, like my big ears and my lovely shiny black nose. I can only agrees, finally someone who understands how to capture my personality!

This is my best exciteds look! They human says this one is her favourite.

Now the only problem I haves is that the human keeps starings at the pictures and saying “Oh how lovelies” when she could be looking at the real thing instead… Thank you very much Tracy, you can come back any times! You’re wonderfuls! PS. Who is this George Clooney everyone keeps mentionings? Are his ears as big as mine?

I am a rescue doggie who was saved by MADRA, a dog rescue based in Co Galway, Ireland. I was adopteds a long time ago and have a great life with my humans, so I does whatever I can to help the other doggies who aren't as lucky as me. You can find MADRA's website here: www.madra.ie
View all posts by jaspermadra →
This entry was posted in Dog rescue, Dogs, photography and tagged dog, dog photography, dog rescue, dog training. Bookmark the permalink.