Eight is a good age!

Today is my official Birthday! Between you and me, the humans and I nearly forgots. You see, because I was dumpeds when I was a youngster, no one really knows exactly when I was born. So the humans decideds that, since my Gotcha day is on April 11th and I was about six months old when I first came to lives with them, they would officially say I was one year old six months after that.

But it’s not a really special day like my Gotcha day, ’cause when I was born, no one was happies to have me at all, or they wouldn’t have dumpeds me once I got a bit olders. Them was bad, bad times, so we saves the extra special celebrations for my Gotcha day instead, ’cause that’s when life got really happies and fun and all the good stuff that a doggie like me should have starteds to happen. 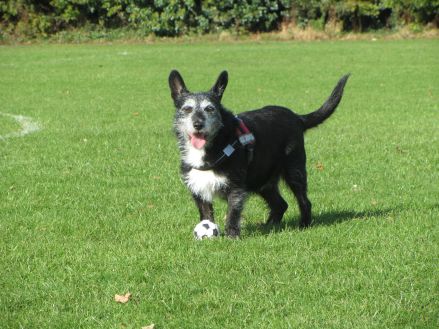 Happiness is a new ball, a nice human to throws it and sunshine.

Anyhows, I got lots of stuff alreadies, so I didn’t need much of a present,  but the humans got me a lovely new ball to play with, ’cause a doggie can never have too many balls! It’s a really nice big one and I has to stretch to get it all in my mouth, it’s lovelies!

And we went for a nice special walk and had nice playings with the new ball. The best present you can gives your doggie is to spend time with them and gives them attention after all. Us doggies always loves a bit of attention.

Every day is a special day when you got good humans.

The humans say now I’m famous, we might have a party for my next Gotcha day next April, so everyone can be happies and celebrates with me. But that’s a long, long time away yet.

I often wonder if my other litter-mates ended up as luckies as me, or if they got dumpeds without anyone ever findings them and starveds. I hopes not and I hopes they neutered my poor mother too and she didn’t have to go on having babies the humans didn’t want. I can’t quite remembers her,  but the humans say she must have been nice to have such a special pupster like me.

I am a rescue doggie who was saved by MADRA, a dog rescue based in Co Galway, Ireland. I was adopteds a long time ago and have a great life with my humans, so I does whatever I can to help the other doggies who aren't as lucky as me. You can find MADRA's website here: www.madra.ie
View all posts by jaspermadra →
This entry was posted in dog training, Dogs and tagged Birthda, dog, dog rescue, dog training, dogs, Galway, Ireland, Jasper's Training Tips, MADRA, Mutts Anonymous Dog Rescue And Adoption, shelter. Bookmark the permalink.