Posted on October 1, 2014 by jaspermadra

I mentioneds before that I don’t likes to share my bed. Them cats is always trying and I ends up sleeping on the floor!

I got to admits, when I was younger, before my legs were ouchy, I used to share the humans bed at night, but I always asked first. Because (are you listening cats?!) it’s very, very rude to annoy people when they’re in their own bed sleepings. ‘Cause your bed is your special safe place where no one should bother you if you don’t wants to be bothered. Everyone needs a special safe place of their own. 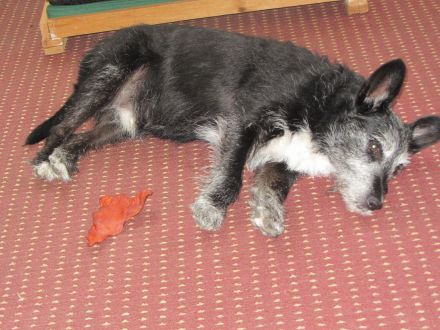 I often ends up sleepings on the floor ’cause the cats steal my bed!

The cats can climb up high where no one can reach them if they wants to be left alone, or hide under the beds. But us doggies aren’t so luckies, so the humans (and the cats!!!) have to remembers to leave us alone when we’re sleepings. 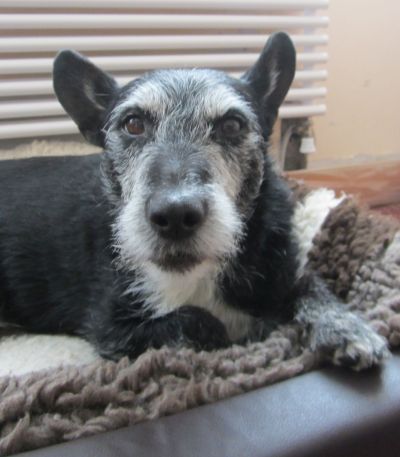 OK, you can come sit with me for a little whiles.

I’m really lucky, ’cause my humans understands this and leaves me alone when I’m asleep. They’ll sometimes come and spend time sittings next to the bed with me, but they’ll always ask first to make sure I don’t minds. And if I do mind, they leaves me alone to sleep. 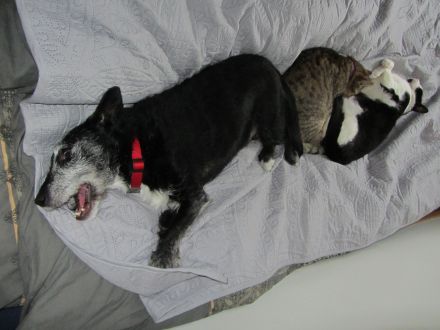 I can’t get mad at the cats for stealing the humans bed, ’cause I stole it too!

Before I ouchied my legs, I used to start every night in my own bed, but I’d wake up halfway and get lonelies. So I’d come and sit beside the human’s bed and ask if I could come up too. The humans used to wake up and see just my ears and my nose and two eyes staring at them. They said it was cute and they always said, “OK then, come on up.” But since my legs got ouchies, I don’t like anyone moving near them. So I stays in my own bed, ’cause the humans move around too much when they’re sleepings. Once or twice I woke up to someone moving near my legs and I half snapped at them before I realised who it was, and was really embarrassed afters, so it’s better to sleep alone. ‘Cause I’d be really, REALLY sorry if I bit the humans by mistake ’cause I was having a bad dream!

I’d rather stay in my own bed nowadays

So, humans, if your dog was happies to let you do stuff and now gets annoyeds, they may be getting ouchy too. So you should bring them to the vet and make sure that everything is OK and not gets annoyeds with them. And make extra sure that the small humans knows to never, ever annoy a dog in their bed.

I still sleep on the humans beds by the way, but only when they’re not in them! Human beds are comfies and the humans don’t mind sharings ’cause I leave as soon as they starts undressing.

I am a rescue doggie who was saved by MADRA, a dog rescue based in Co Galway, Ireland. I was adopteds a long time ago and have a great life with my humans, so I does whatever I can to help the other doggies who aren't as lucky as me. You can find MADRA's website here: www.madra.ie
View all posts by jaspermadra →
This entry was posted in Uncategorized and tagged dog, dog rescue, dog training, dogs, Galway, Ireland, Jasper's Training Tips, MADRA, Mutts Anonymous Dog Rescue And Adoption, shelter, sleeping dogs. Bookmark the permalink.