You got to keep them humans on their toes!

This is one is just for you doggies. As you all knows, my job is explainings to you how to behaves so that the humans will be happies with you. But you have to make sure they don’t get too smug and lazies by keeping them on their toes too. ‘Cause if you’re too good, they’ll think you’ll just put up with anything and they can just forgets to walk you when they feel likes it and do boring stuffs with you and you’ll just behaves no matter what.

I hears them, but I’m pretendings I don’t!

My favouritest way of embarrassing the humans is to pretends I’m deaf when they’re trying to tells me stuff when we’re out in publics. Especiallies now I’m a famous doggie and I’ve been telling everyone how much work the humans have put into trainings me 😉 It makes the humans look really stupid when they think they got a famous, well behaved doggie and then I starts ignorings them. 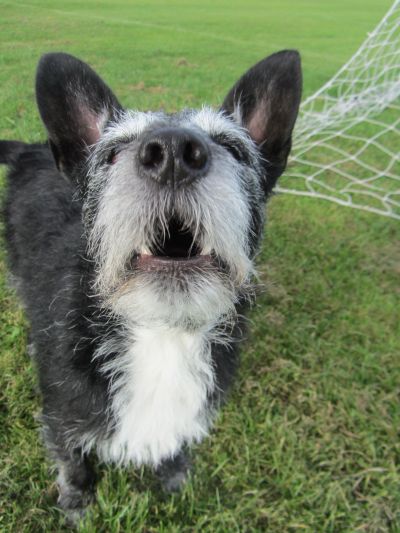 Got them really good that time!

The other day, I managed to really embarrass them by pretending that I was so old and slow that I could hardly walks at all when we passed by some peoples who were standing around watching us. The humans were standing there waitings for me embarrasseds, ’cause they were thinking everyone must think they’re being really mean to make their poor slow old doggie go on walkies. That will teach them for making me go home rather than taking me swimmings like I wanteds!

Barkings at other doggies in public is always good too, ’cause it always embarrasses the humans.

And if you ever meets any humans who don’t really likes doggies, just pretends you love them more than anyone and make a special big fuss of them – I learneds that ones from the cats and it really works. It embarrasses both your humans AND the visitor!

Tip: Roll in something smellies just before you go someplace nice!

But THE BEST embarrassings is to wait until you get someplace with lots and lots of peoples before going to the toilet when out walkings. That way, the humans will have to clean it up with everyone giving them dirty looks for letting their dog poo there in the first place. It can be hard to hold it in long enough to get to a really good place like that, but it’s really worth its!

Of course, now I’m olders, I try not to embarrass the humans so much, ’cause I knows better. And I feels a bit sorry for them when I does it, ’cause they are good humans and they usually means well.

Embarrasings should be funny, but not mean.

When I was younger, I did even more embarrassings like runnings away and not listening when the humans calleds me and jumping up at peoples and stuff like that. But all that kind of stuff is just too much like hard work now I’m olders!

1 Response to #50 – Embarrassing the humans