#44 – Crazy humans and their stupid ideas!

Them humans is crazies, they always have big ideas of new stuff they wants to try on you and you’re not always going to likes it.

The newest thing they got into their heads is that I need to be groomed betters, as they say they let me get a little bit scruffy latelies and they keep finding my hair all over the house. I think it’s cat hairs they’re findings, they should brush them more instead! I think scruffies is just fine! 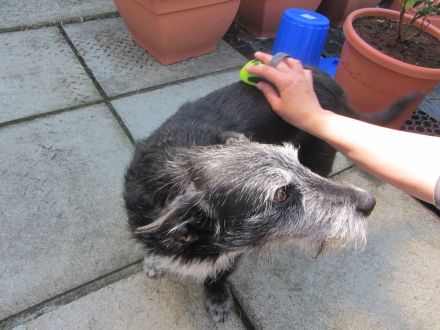 I don’t mind a bit of brushings.

So they’ve been brushing me every day with this new slicker brush like they use for horses. I don’t mind that bit, ’cause I likes being brushed. (The humans says they took enough hair off of me to makes another doggie and I’m not even very hairy.) 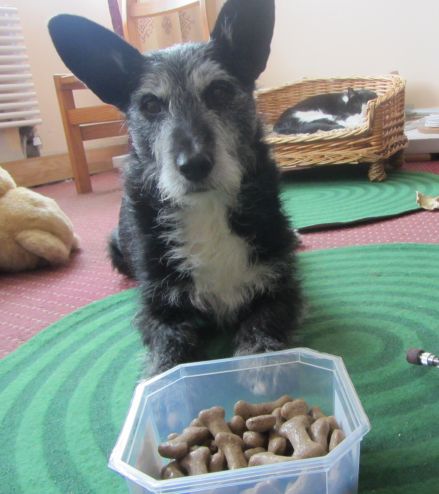 There better be lots of biscuits before you touch my nails!

But then they said that they let my nails get too long ’cause I always makes such a fuss about anyone touching my feet, especiallies since I ouchied my knees. I really don’t like the nail clippers, ’cause I’m sure the humans are going to hurt me by accident. They promise they won’t, but I remember one time they clipped too close by mistakes and it was a little bit OUCH. They even had the nerve to say it was my fault, ’cause I wiggled?! Well I had to wiggles, ’cause they didn’t give me enough biscuits! The rule is one biscuit per nail humans, or I wiggles!

I got some white claws, but mostly black, so the humans cuts the white ones first and then tries to cut the black ones the same length. But they’re always afraid they’ll cut too much, so my black claws is always a bit too long.

Anyhows, they decideds now that they’re going to try one of them grinding machines on my nails instead and bought one without even asking me if I wanteds to try it. It started out fine, they showed it to me and lets me sniff it and then gave me a treat and I said, OK, nice machine, it can stay. Then they turneds it on and gave me another treat and that’s OK too, it can be on and go bzzzz…

But THEN they tried it on my feet and it tickles! They only touched it for a second and then gave me a treat, but I still had to go hides under the table, just in case. So they made me work for ages, giving them the paw and letting the machine bzzzz against my nails and then giving me a treat. So I think it might be OK, but I still don’t really likes it. The humans said that they wants to use it every few days until my nails get really short again. I DON’T likes the sound of that at all! 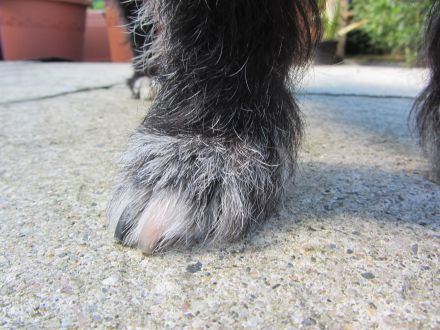 I guess it’s a bit betters…

The humans say they tried it on themselves and it doesn’t feel bad at all and I shouldn’t be such a big wuzzy. They said that they heard some doggies sleeps while the humans are grinding their nails and I should be brave like them. Well, the humans told me themselves before that just because another doggie does something is no reason I should do it too!

So, I’m going to see how it goes, but there’d better be LOTS and LOTS of biscuits and treats involveds!

I am a rescue doggie who was saved by MADRA, a dog rescue based in Co Galway, Ireland. I was adopteds a long time ago and have a great life with my humans, so I does whatever I can to help the other doggies who aren't as lucky as me. You can find MADRA's website here: www.madra.ie
View all posts by jaspermadra →
This entry was posted in Uncategorized and tagged dog, dog rescue, dog training, dogs, Galway, Ireland, Jasper's Training Tips, MADRA, Mutts Anonymous Dog Rescue And Adoption, nail cutting, shelter. Bookmark the permalink.