What may I do for you today?

It’s very, very importants to have a job to do when you’re a doggie, ’cause us doggies needs to feel like we’re useful and get boreds otherwise too. I’ve got lots and lots of jobs, my main job is to make sure the humans never gets bored or lonelies and making sure the cats all get along properlies. And of course I also does a lot of proper workings showing everyone how good rescue doggies can be. But these are my top 5 everyday jobs.

Keeping the humans entertaineds is a tough job, but some doggie’s gotta do it!

The humans have to do lots and lots of boring jobs, so you got to make sure that they don’t get too boreds, by always having a ball or a toy ready for them to play with when they’re workings. So if they’re washing the dishes, get your ball and stand in the hallway, bouncings it until the humans come and kick it for you. Humans find washing dishes borings (I thinks they should just let me lick them clean instead, I wouldn’t mind!), so it’s important to give them something to do.

The same is for cleanings or doing stuff in the garden – everything is better with a ball! Sometimes the humans say: “Go away with your stupid ball, I’m busy!”, but I knows they don’t really, really mean it! 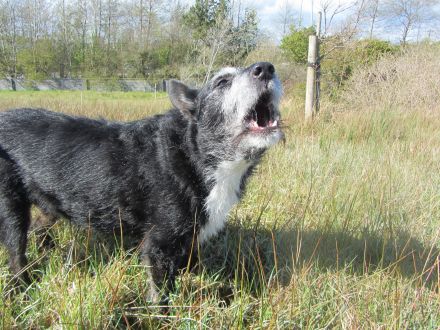 It’s importants to let the humans know about anything unusual!

#2 – Let the humans know of any suspicious activity

It’s importants to make sure that no one comes in to steal your humans or the house. So you got to bark and bark and barks if you hears anything out of the ordinary. Like a truck reversing up the road or an ice cream van, but especially anyone who comes to the door. The humans get annoyeds if you bark too much though, so you gots to shut up when they tells you to – eventuallies! 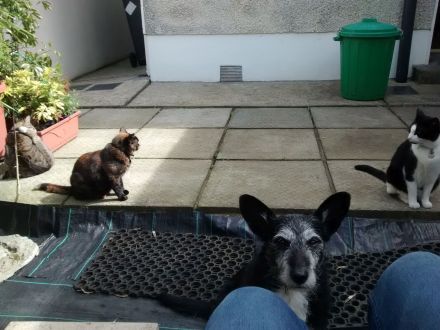 All the cats are OK and behavings, so can I have my reward now?

#3 – Protect the cats and make sure they behaves

Sometimes the cats are outside enjoying the air and some other cat comes up and tries to move in and attacks them and there’s loud cat screaming and stuff. So you gots to run to the door and bark and barks until the humans let you out and then you gots to chase the other cat away while barking loudly. Be careful though, sometimes I ends up chasing my own cats by mistake, ’cause I’m too busy running and barking to stop to look and smell them – Oops!

Other times my cats don’t get on with each other and will chase each other and stuff. It’s also a dog’s job to break up any arguments! You should try and bark in the ear of, and chase, the one who starteds it, but chasing them all will do if you’re not sure. They’ll all get the message!

#4 – Close the door for the humans

This is a most important job. The cats (and me…) are always leaving the door opens and the humans don’t likes it ’cause they get cold. So they traineds me to close the door for them and I does it all the time. Sometimes they even gives me a reward for closing the door, I never knows when, so this is super excitings ’cause us doggies loves to gamble! 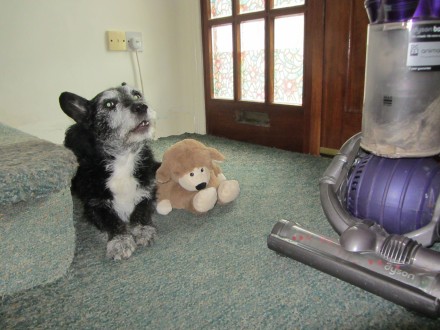 That vacuum cleaner better not try anything!

#5 – Protect the humans from the vacuum cleaner

The vacuum cleaner wants to eat the humans, but it’s OK, you can persuades it to behave properlies easily. All you gots to do is get a teddy and shakes it really hard the whole time the humans are vacuumings, that’ll show the vacuum cleaner what will happen if it tries anything! When I was new here, I used to bark and bark at the vacuum cleaner to make it behaves instead, but the humans got a bit annoyeds, so shaking the teddy is better.