#36 – Jasper’s top ten games to play with your human

Playing with the humans is importants, as I explaineds before in tip #16. Here’s some of my favourite games to keep everyone amused.

#2 – Tuggy
I used to play tuggy lots before I ouchied my knees, but the humans won’t play it properlies with me anymore, in case I hurt myself by tugging too much. The humans say some peoples says you shouldn’t play tuggie with your doggie and other peoples say you should never let the doggie win in case they thinks they’re the boss. But I played tuggie lots and lots when I was younger and I gots to win too and I’m still not the boss. I learned Leave It! really good from playing tuggie, ’cause it’s more fun to let go sometimes and lets the humans shake the tuggie for you.

#3 – Where Is It?
Where Is It? is a super FUN game! The humans hide your toy and you gots to sniff and sniff and look everywheres until your finds it. The humans always starts with easy hidings and then makes it more difficult when we get warmeds up. I’m really good at finding my toy, ’cause I’m smart and I got a good nose too!
You can plays it with biscuits or your dinner too, but the humans prefer my toy ’cause they don’t want me to get fat.

#4 – Toss It!
This is a good game of sharings that I inventeds myself. Sometimes when the humans gives me my chewy, I feel more like playings than chewings. So I tosses it to the humans and they has to toss it back to me. We usually plays for a few minutes and then I settles down and chews – sometimes I get the humans to hold the chewy for me afters, ’cause it’s nice to have company when chewings. 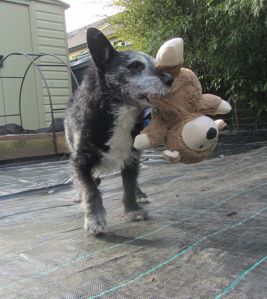 #5 – Shake the teddy
This is a good game to play with the humans, they tosses the teddy at you and you gets to shake it and shake it and then toss it back. I really likes shaking my teddies, but it doesn’t mean I want to kills stuff in real life. I’ve met all kinds of things like birds and small animals and kittens and I would never shakes them, cause that would be mean! 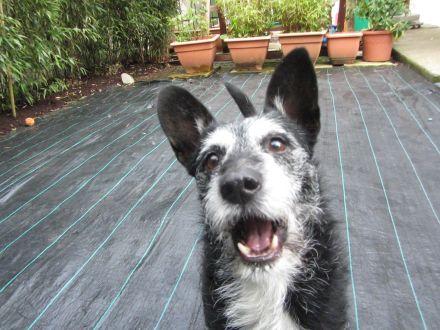 Bitey games are lots of fun!

#6 – Bitey Games
This is fun game, but you can only plays it if you’re a super good and gentle dog like me. The humans pushes and pretends to bites you with their hands and you rolls arond on the floor and biteys them back! You got to be carefuls not to hurt the humans though, so you have to stop if you gets too exciteds. 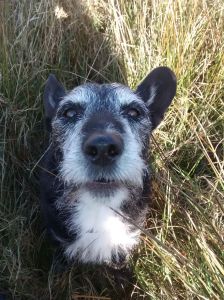 I loves to do pretty much anything that involves using my brain and attention from the humans.

#7 – Heel, Sit, Stay
This is a super FUN game to play on really wet days when you can’t go for a walk. The humans have treats and you got to do your best heel around the house. But every now and again, the humans will tell you to stay or sit while you’re walking, so you gots to do that right away and not follow them while they keeps on walkings. Then they either comes back for you or tells you to heel again. They gives you a treat every now and again for doing it right and it’s a great way of learning while having FUN 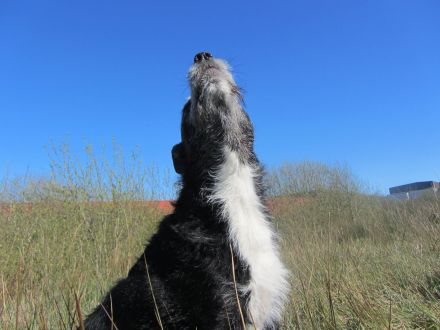 Howling with the humans is the best !

#8 – Hooowl!
I really likes to howl with the humans, if they starts, I’ll keep on howlings and howlings and I loves it if they howls with me! We have a house with no walls sticking to other houses, so your neighbours might not be so happy with you if you don’t. So you’d better check before you starts!

#9 – I’m going to catch you!
This is a super fun game! You can pick up a toy and the humans will pretend you’re not allowed to have it and keep on saying: “I’m going to catch you!” in a fun voice while you runs away and hides under the table and they chase you. It’s OK to do this, because you both know you’re just playings and you know Leave It for when the humans really want you not to have their stuff. 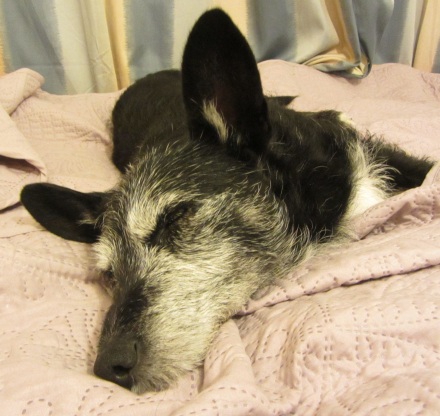 #10 – Learning new stuff
I love to learn new stuff with the humans, I don’t care what it is as long as it means lots of treats and attention! They say you can’t teach an old dog new tricks, but I say that’s stupid! I’m even smarter now than when I was a pupster and I know what the humans want much better ’cause I understands them more!