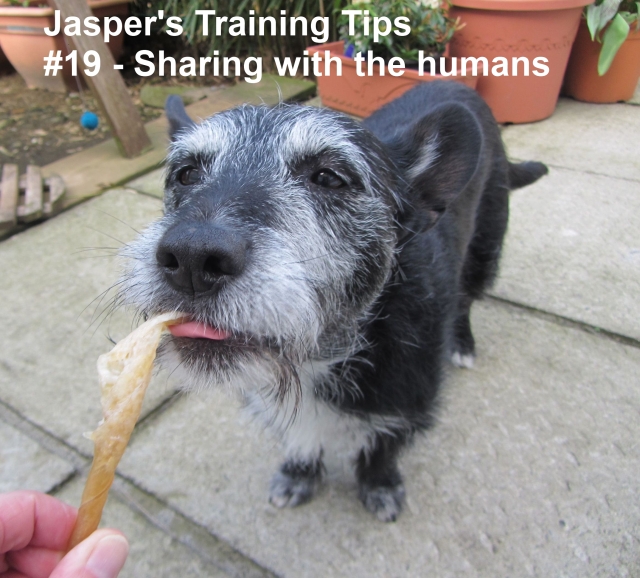 The humans are handies for holding chewies!

#19 – Sharing with the humans
Some doggies don’t likes it when anyone touches their stuff, but I don’t minds it cause the humans have always been fair withs me. The never takes stuff away from me just to be mean and when they puts their hand near my food bowl, they usually just wants to give me more, so I’m happy to see their hands near my stuff!

Sometimes they do have to takes things off me, like the end of my chewie cause I might chokes, but they never just steals it, they swaps it for something else nice, so I don’t minds. The humans are evens handy for chewings, cause they can hold the chewy for you and you can use your attention for chewings insteads. I always saves my chewies for when the humans have time, cause I likes to chewies with the humans.

And of course, I knows that toys are much, much more FUN if the humans plays with them too, so they can touch my toys whenever they likes!

Gets the humans to teach you it’s OK to touch your stuff when you’re a pupster if you can, cause the humans really don’t likes it if you growls at them! If you knows “Leave it”, it’ll be easiers for the humans to swaps stuff with you too, so gets them to teaches you that as well.

If you really don’t likes your stuff touched, only eats it in your crate and makes sure the humans knows that your crate is your special place and they shouldn’t annoys you when you’re in it chewings. But you should really gets a trainer in to help the humans learn how to makes you not mind it so much too, cause it coulds get you into trouble if you’re not carefuls.

Good linkie for how to train your pupster to not mind sharing their stuff here:
http://dogtime.com/puppy-training-prevent-object-guarding-dunbar.html

I am a rescue doggie who was saved by MADRA, a dog rescue based in Co Galway, Ireland. I was adopteds a long time ago and have a great life with my humans, so I does whatever I can to help the other doggies who aren't as lucky as me. You can find MADRA's website here: www.madra.ie
View all posts by jaspermadra →
This entry was posted in Uncategorized and tagged dog, dog rescue, dog training, dogs, Jasper's Training Tips, MADRA, Mutts Anonymous Dog Rescue And Adoption, shelter. Bookmark the permalink.